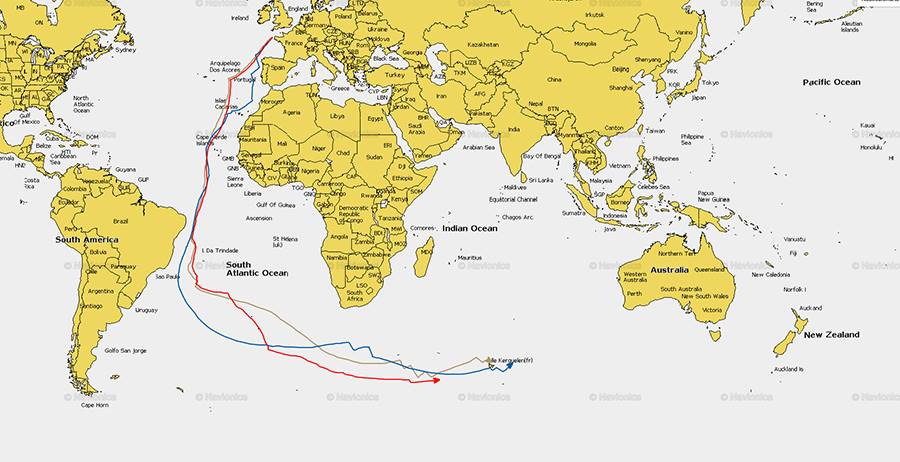 BANQUE POPULAIRE IS STILL LEADING THE RACE. NOW IN THE SOUTHERN OCEAN, AS SPINDRIFT AND IDEC CHASE THE GHOST.

Last night the team that set the record around the world under sail was awarded the trophy for their accomplishments at the Musee de la Marine.

Banque Populaire V sets a new record for around the world non-stop. Average speed of 26.51 knots for 29002 miles.

Banques Populaire V the massive French trimaran has been at sea for 40 days and nights. She is under 2500 miles from the finish. The Azores high is forcing them to sail almost towards Boston, MA to get to Lorient.

Interestingly, this final leg in the north atlantic has been the bugaboo for many attempts, each of whom arrived here ahead of the record only to get stuck as they approached the finish. BP is hold a 2000 mile lead over Groupama and while I am certain no one on board would whisper it until they cross the finish line, they can taste victory.

That we can share this, is an example of the marvel of modern technology. Brian Thompson reported about a week ago an unusual sighting in the sky from the deck of Banque Populaire V. Here is validation of what he saw, thanks to NASA.

“Banque Populaire V” holds a thousand mile lead over the ghost ship “Groupama” the holder of the record around the world, as she navigates through icebergs at speed. As always, with boats of this potential, it is about slowing down more than simply letting her run. They passed most spectacular iceberg 28 times the size of the Isle of Wight, and are about 9,000 miles from the finish. That does not sound like much anymore. Obviously a lot can happen between now and the finish but so far they have had great success.

Honestly, I am having trouble maintaining interest in the Volvo Race. Too many legs, too many inshore events. For me, it would be more interesting if the legs were longer.

Banque Populaire V is blazing along. Their lead over Groupama 3 after 11 days is more than 1800 miles. Banque Populaire is a massive trimaran at 40 meters. The web site is very well set up with as much information as you could ever want to know and very easy to navigate.

After having hit an unidentified object at speed during the night two days ago; attempted repairs; the decision has been made to stop the attempt around the world. At the time Banque Populaire was approximately 290 miles behind the record. A distance that could have easily been recouped. See the story in Brian Thompson’s blog.

speed of 37 knots south of the 40th parallel, the 131-foot trimiran Banque

Trophy Record attempt. Under the shock, part of the crash box drift – part

and his crew to heave to for an hour to go account of the damage.

“Tonight, we immediately felt the shock but the Maxi Banque Populaire V did

not stop,” said Bidegorry. “However, we made the decision to halt the

progress of the boat and ride the sails. But in the dark night, it was not

easy to realize the damage.”

Further confirmation of the damage has not been available. The immediate

region so that they can better review the situation in daylight. The team

is currently at the 45 degree south latitude, southwest of the African

Banque Populaire V is 291 miles ahead after 24 hours! Brian Thompson is the only non Gall aboard In order to beat the record around the world they must finish by march 11, 19:55:37 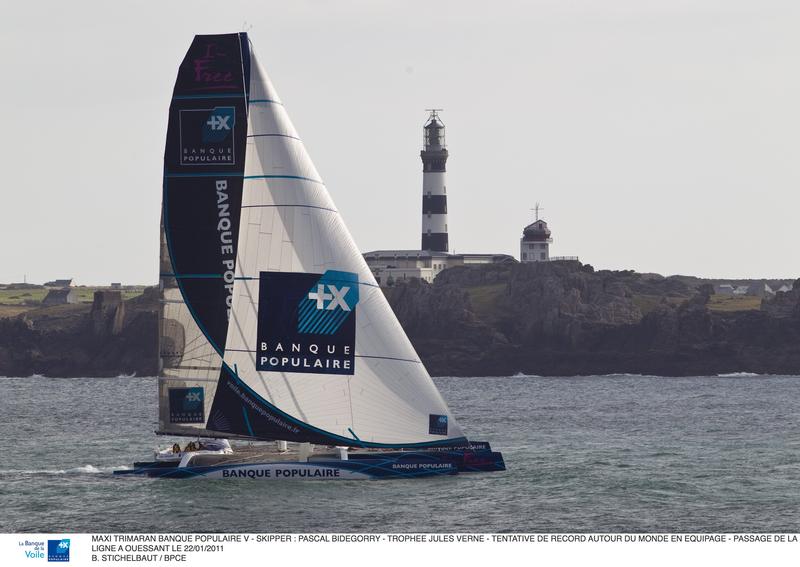