When a boat has 3 550 mile days it is hard to compete against them. Mar Monstro won the transatlantic race overall

I am back in front of my computer. Leaving behind the routine that my body had come to recognize as normal. I lost some weight, not unexpected. Now I must reset to land.

Every transatlantic race is a unique experience. This one was no different. Perhaps the most remarkable circumstance was how the Azores and Bermuda Highs dominated the Atlantic. I have never sailed the north atlantic like this. The water temperature was much warmer than expected, and the sea state was more calm than I ever would have expected. The race certainly did not meet my pre-race predictions. 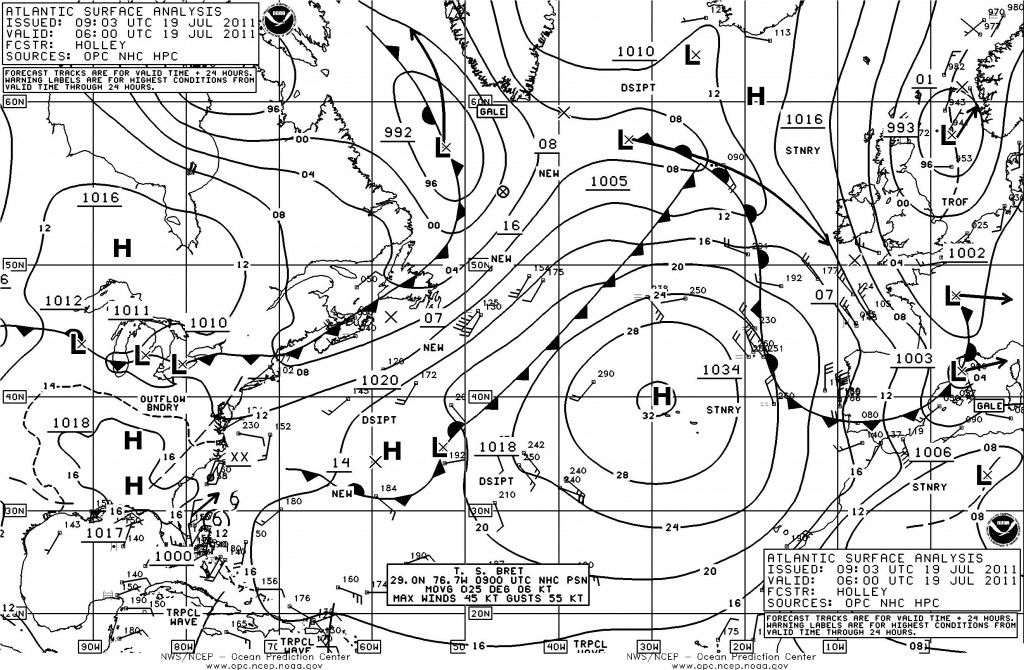 Our start on June 29th from Castle Hill in Newport and finishing off the Lizard in southwest England approximately 150 miles from the dock. Our elapsed time was 15 days 11 hours 23 minutes and 23 seconds. The stated distance of the course was 2975 miles. I know we sailed quite a lot further. Picking our route was the true challenge for the race. The winners did a better job than we. “Carina” sailed a brilliant race and was still beaten in the end by Bill Hubbard’s “Dawn Star”. Full results HERE.

“Snow Lion” is always a pleasure to sail. We had moments, I hit 22 knots once; the high of the race. We had only 3 days with runs over 200 miles. We needed more of those days if we were to win the race.

This is it. We are off tomorrow, so it is too late to change anything else on the boat. Crew dinner tonight; weather briefing tomorrow morning; then it is off to the start line.

Our class is very diverse. the 289′ Maltese Falcon, 66′ catamaran called Phaedo, Zaraffa a 66′ reichl/pugh. I hope they do not put Maltese Falcon of the starting line with us. She is just too big; she can’t, nor should anyone expect her to be able to manouvre like a small boat. She is a ship really.

This will be my last entry until I return. Hopefully with great tales of the ocean and photographs to support the stories. Wish me god’s speed. see you in a few weeks.

On another subject I am including the following because messages in bottles is a fascinating thing for me.

A glass bottle, cast into the Gulf Stream off New England one year ago as a farewell gesture to a departed sailor, turned up last week on a beach in the Outer Hebrides of Scotland after an improbable, 3,000-mile transatlantic voyage.

Bound with rigging tape and sealed with wax, the rum bottle carried handwritten tributes to Mattapoisett resident Ken MacKenzie, a lifelong sailor who died of cancer in May of last year at the age of 69.

The bottle was launched from the deck of the 76-foot sailboat Lilla last June when the yacht, owned by Simon and Nancy DePietro of Mattapoisett, entered the axis of the stream while competing in the 2010 Newport to Bermuda race.

Coincidentally, Lilla sailed into Bermuda on Monday of this week, taking first place in this year’s Marion to Bermuda race and setting a course record in the process.

“Simon and Nancy live right next door to me, and Ken and I go way back with the boat,” said Mary Lou Manley, MacKenzie’s life partner who conceived the idea of the tribute at his memorial service.

MacKenzie spent his life on the water, Manley said. For many years he owned and sailed the famed Ticonderoga, a 72-foot wooden ketch built in 1936 and widely regarded as the finest work ever to come from the board of the legendary boat designer L. Francis Herreshoff. When Herreshoff died it was MacKenzie who scattered his ashes from Ticonderoga, Manley said.

The rum bottle washed up on the western side of the Hebrides on South Uist, one of the islands in the rugged chain known as “Scotland’s breakwater.”

It was discovered by Christine and Kevin Brook, a vacationing couple from the Winchester area of England, as they walked on Drimsdale Beach.

“The first thing they saw through the glass was the Rudyard Kipling poem, ‘If,’ that we put in there,” Manley said.

Her contact information was included in the contents, and when she checked her voice mail last Tuesday, the highland burr of a man named Ian McGuinness briefly informed her the bottle had made landfall. That was followed by an email from the Brooks, providing more details.

“Their email asked me if this was a live address,” Manley said. “It said, ‘If so, do we have a story for you!'”

Drimsdale Beach does not get a lot of foot traffic, according to local resident Jean Newman who works for Am Paipear, the south Uist community newspaper that has custody of the bottle and its contents and plans to run a story on the find in its next issue.

“I walk that beach often, and you feel slightly offended if you see anyone there because everyone wants the beach to themselves. There are plenty of beaches to choose from here,” she said in a telephone interview.

“It was a good place for the bottle to arrive because there are a lot of rocky spots. It’s rather unique that it survived intact.”

It seems unlikely that the bottle may have been on the beach for a long time, she said. “It’s a tidal beach, so it’s lucky that it landed far enough up that it didn’t go back out on the tide.”

The second bottle may still be out there, Manley said. She joined Lilla in Bermuda for the return trip to Mattapoisett after last year’s race and launched the second bottle herself, 10 days after the first.

“The second one might show up,’ she said. “But I just think that it’s really cool that this one made it somewhere and someone actually found it. Here he is Scottish and he ends up in Scotland.”

The departure time is closing in.  The Skipper’s meeting is tomorrow evening. The inspection team was making the rounds today and I expect tomorrow. I hope you are ready.

The Skippers meeting for the Transatlantic race will be Friday evening. Three starts are scheduled. June 26, June 29 and July 3. Yellow Brick will provide tracking during the race. For those of you who might like to watch our every move, Register with Yellow Brick.