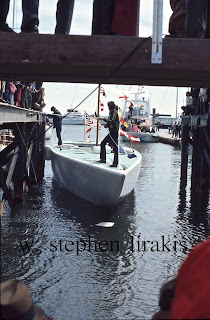 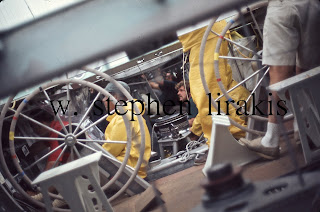 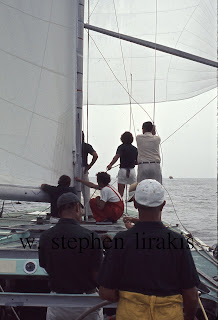 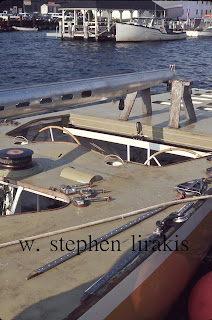 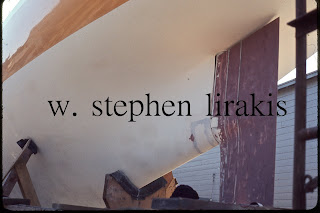 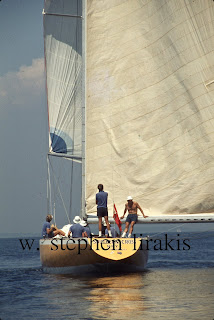 The Bermuda Race is now history, prizes awarded, boats already on their way back. In 1970 when we won on “Carina” we arrived at Montauk the morning of the 4th of July, to the sight of a whale sounding. That night we were entertained by the fireworks at every club and town on each shore all the way to our destination, Greenwich, Ct.
“Courageous” was launched in May. History would show just how good she was. Still today a benchmark boat. The Australians arrived in Newport with “Southern Cross” a Bob Miller aka Ben Lexan design, full of progressive ideas. Her fatal flaw was probably too much wetted surface. She had long overhangs, the theory being that when heeled, waterline length increased. All the foreign boats suffered from inferior sails. It is one area where the United States excelled.
One of the stories that merits mention is the one of the helmsman of “Courageous”. Bob Bavier the skipper of name, had replaced Eric Ridder as helmsman in 1964 and was credited with the remarkable turnaround in the success of “Constellation”.  By 1974 he was no longer up to the task, “Courageous” the clearly faster boat was struggling to beat “Intrepid” a better sailed boat. Bob Bavier was replaced by Ted Hood and Dennis Connor came aboard from “Mariner” to start the boat.
Bob McCollough, close friend of Bob Bavier was the one who had to speak to his friend. This remained a bitter moment for Bob Bavier the rest of his life.