Ben Franklin was one of the most accomplished men of America. He appears to have been not just a jack of all trades, but a master of all trades. He filled his days and his social life. Rumor has it he was a great hit with the women in France.

This dispute seems to have become a he said she said. A question of the intention of language in old letters?

I do not know the details. I believe the difference is whether or not the bells were a gift or a loan. They have been on extended loan and exhibit to the Boston Museum of Fine Arts; which has offered to purchase them.

JNS.org – Talks between the historic Touro Synagogue in Newport, RI, and a New York City synagogue that claims ownership over the Touro Synagogue and its artifacts broke down this week after a U.S. District Court judge declared the mediation failed, the Providence Journalreported.

According to the Providence Journal, a dispute between Congregation Jeshuat Israel, which uses the historic Touro Synagogue that was built in 1763, and New York City’s Congregation Shearith Israel, which was given the deed to the synagogue in the early 19th century when the original Jewish community left, arose over plans to sell the synagogue’s 18th-century finial bells to the Boston Museum of Fine Arts for $7.4 million. Touro Synagogue is the oldest synagogue building that is still standing in the U.S.

The bells, which were designed in the mid-1700s by Myer Myers, adorn the handles of the Torah scroll and are rung when the Torah is raised. The New York congregation opposed the sale of the bells and claims that Congregation Jeshuat Israel has violated its lease terms, which were established in the early 20th century when the Newport Jewish community was revived.

Lawyers for each of the synagogues told the Associated Press that their lawsuits would proceed now that federal mediation has failed.

The date 11 12 13 is the last numeric event until 4 4 16 which is a square. As predicted the temperature dropped after rain and turned to snow.

Francois Joyon and IDEC after a second day of sailing are 82 miles behind the phantom Thomas Coville and SOBEDO despite reeling off 600 mile days. There is still plenty of time to make up the difference; particularly when you look at what Thomas Coville encountered in his final approach to the Lizard. The System the IDEC is riding seems quite stable.

Considered by most the father of modern short handed sailing. In 1964 he won the OSTAR, single-handed transatlantic race from Plymouth UK to Newport, RI beating the next competitor by a wide margin. I remember seeing him sail into the harbor after the finish. He sailed many fully crewed races and introduced many of the following generations of french sailors to the sport.His legacy is in full bloom today.Our paths crossed a number of times after that in various parts of the world. Many years later his nephew spend the summer with our family. 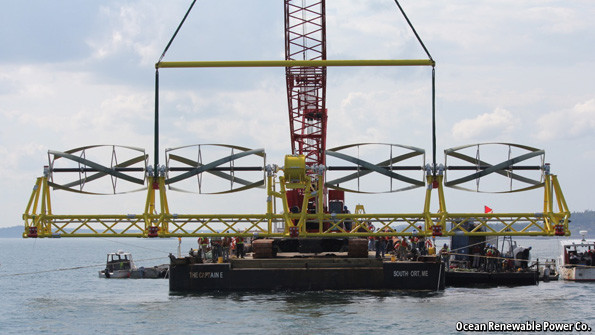 ONE problem with renewable energy is that neither the wind nor the sun is reliable. That cannot, however, be said of the tides. The Newtonian clockwork of sun and Moon can always be relied on. The problem with exploiting tidal power has, rather, been finding places to do it efficiently: bays or estuaries with a suitable tidal reach and a topography that permits a barrage to be constructed. Only then, with established designs, can turbines be installed through which the tide can ebb and flow.

That would change, though, if turbines could simply be attached to the sea floor. And several firms are trying to make it so. Some, such as Andritz Hydro Hammerfest, in Norway, and Marine Current Turbines from Bristol, in Britain, take the relatively simple approach of sticking what are little more than strengthened wind turbines onto the seabed.

In the case of such turbines, though, bigger is better. And, since a turbine is not much use if its blades stick above the surface, that means they need to be located in reasonably deep water. Which is a shame, because a lot of otherwise-suitable sites are too shallow.

Not all wind turbines work this way, though. Some smaller ones are skeletal cylindrical structures whose axes of rotation are at right-angles to the direction of the wind, rather than aligned with it. And that, with the important modification that this axis is horizontal rather than vertical, is the basis for several novel designs for tidal-power generators which can operate in shallow water too.

Engineers at Ocean Renewable Power Company, in Portland, Maine, and Kepler Energy, in London, both use this approach. And Ocean Renewable is starting to commercialise it. In September 2012 its TidGen generator was deployed in the Gulf of Maine. It thus became the first plant to deliver offshore-generated power of any kind (wind, wave or tidal) to an American electricity grid.

Kepler is a little behind, but is hoping to try out a full-scale version of its Transverse Horizontal Axis Water Turbine in the Bristol Channel soon. Its engineers’ calculations suggest this device will generate 50% more power from a given tidal stream that a conventional turbine can manage.

Nor are such submarine waterwheels the only new approach. Engineers at Pulse Tidal, in Sheffield, Britain, have decided to use hydrofoils rather than turbines. A hydrofoil is, in essence, an underwater wing. As water flows past it, the current generates lift. Pulse Tidal’s hydrofoils are mounted in such a way that this lift causes the ’foil to nod up and down. Since it is attached to a generator, that nodding generates electricity.

Even with innovations like these, tidal power has a long way to go before it becomes an important source of electricity. The wet, salty environment of the ocean is a hostile (and expensive) place for mechanical engineering to work. But if it can be made to do so, the lure of a reliable, free fuel source may mean the seabed eventually becomes littered with tiny power stations.

I have not given this event proper acknowledgement. This video comes to us via “Sailing Anarchy”.

The photos came with the log book. A true first hand account of the 1905 transatlantic race. An event that became the stuff of legends. An Atlantic crossing record, that stood for a very long time. If you are a purest, you might argue that the record still stands as the boats that have broken the record are so very different.

In today’s world it is hard to imagine dressing as show to race across the atlantic.

Virginie Heriot, I have written about her before, many consider her France’s most famous woman yachtsman. I am certain she was never not properly dressed for any occasion. The Photo, I found and purchased before I ever read the caption. I was pretty certain it could be no one but Virginie. 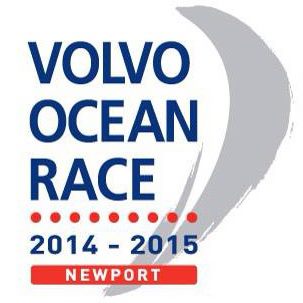 * Accumulations… snow accumulation of 8 to 15 inches.

* Timing… light snow develops by Friday morning. Snow will
increase intensity during Friday afternoon. There may be a brief
change over to rain especially near the South Coast during the
afternoon. The rain should Switch Back to heavy snow by Friday
night and Saturday morning… when the bulk of the storm is
expected.

* Impacts… heavy snow and very strong winds will bring the
potential for near blizzard conditions. The worst of the storm
will be Friday night into Saturday morning. Snowfall rates of 2
to 3 inches per hour possible. Travel may become nearly
impossible with blowing and drifting snow.

* Visibilities… one quarter mile or less at times.

It seems the weather forecasting has been exceedingly accurate recently; snow was predicted for 7 am this morning and on cue it began; lightly, but has continued all day. Sugar coating everything in the calm.