The Panerai Classic Yacht Regatta 2018 concluded yesterday with an overall win for “Siren” a NY 32 owned by Peter Cassidy. We sailed friday, saturday and sunday.

3 days of near perfect weather.

I RACED THIS WEEKEND IN THE CLASSIC YACHT REGATTA, WHICH ALWAYS ATTRACTS ELEGANT BOATS WITH GRACEFUL LINES.

One can find them  all over the world, abandoned ships; from star boats and lightnings; to schooners and square riggers. The legacy of the sea. Even the majestic “J” class could be found for years in the mud. The last Oracle IACC is to be broken up. “Independence” the 12 meter was cut up many years ago; as was Thomas Lawson’s “Independence” was launched in May and cut up in September.

The first plank is on Coronet. The deckhouses are in place.

The framing is complete. Preparation for planking will start I expect. Finally the shape looks finished. She is the antithesis of the AC 72’s.

“Coronet” as many of you know is being restored at IYRS, (really by Bob McNeil). A multi year project. For anyone who loves building wooden boats this is such an interesting project.

It is winter, and “Coronet” is on the Newport waterfront, but in fact the building in which “Coronet” is housed, was rather warm; wood stove, a dog and wood shavings. What more could a shipwright ask for?

“Coronet”, Rufus Bush’s Schooner launched in 1885 at 133′ on deck. The restoration was originally the dream of Elizabeth Meyer, who had previously restored “Endeavour”. Now the project of Bob McNeil. Scheduled to take 5 years, an enormous undertaking. She is at IYRS

Everything is of such a massive size it makes everything done real work.

The Bronze floors are replacing wooden ones; saving quite a lot of time and money. Not that it matters, probably saving a lot of weight as well. I have never felt that “Coronet” would have the elegant look of “Endeavour” but this construction project has softened my heart.

“Coronet” is available to visit and worth the look.

IYRS has just concluded an exhibit of Appleton’s models. 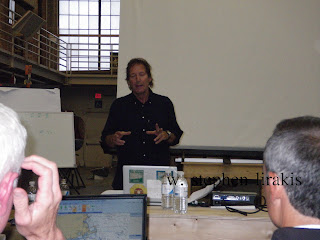 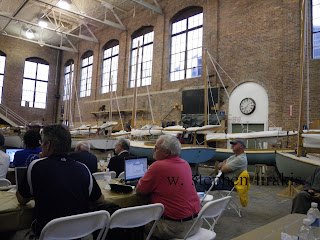 Last evening, I along with approximately 30 other fellow sailors listened to Peter Isler speak about the routing program Expedition. Developed by Nick White from New Zealand; it is a very powerful easy to use program.
This event was held at IYRS (International Yacht Restoration School) and organized by Custom Offshore  Jonathan and Jeffrey Udell.
I found it outstanding as Peter explained how he customized the program for his logic, his use.(Peter will be navigating “Ttian” in the Bermuda Race. Looking at his projections, he expects to be at the north wall of the Gulf Stream just as the wind dies (about 18 hours into the race)
Given that this year there is a meander that flows along the rhumb line straight to Bermuda; we will all be trying to enter this at about the same place. It could get crowded.
see you on the starting line tomorrow. 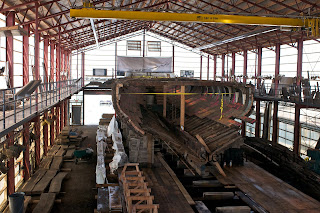 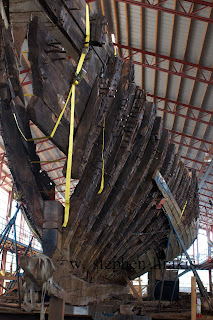 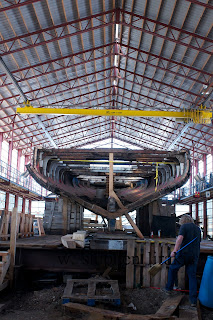 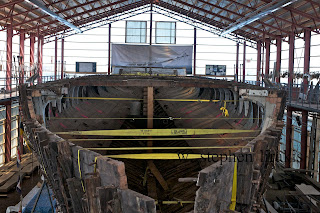 I have been visiting “Coronet” periodically to watch her progress. The winter progress seemed much like the winter itself, long and drawn out without much progress. What is evident is the careful planning, the keel and stem are rebated and ready. No small feat, remember everything in this project is really big.
Here are photos side by side from 10 days ago and today.