This is footage from the 2011 race. Already so long ago. The Transatlantic race this summer from Newport RI to the Lizard in England. There will be 3 starts beginning in June, the last start in July for boats like “Comanche” and “Rambler”. I intend to sail with many old shipmates once again on “Snow Lion” belonging to Larry Huntington.

Francois Joyon set sail on his trimaran “IDEC” yesterday from New York yesterday in an attempt to break the single-handed transatlantic record; presently held by Thomas Coville and Sobedo. He is, as I write 46 miles behind Thomas Coville’s pace. The record stands at 5 days, 19 hours 47 minutes, 20 seconds set in july 2008.

Francis Joyon initiated his attempt to smash the outright solo sailing record this morning at 09:15:20 hrs UTC (11:15:20hrs CET). In order to beat the current record of 5 days, 19 hours, 30 minutes and 40 seconds held since July 2008 by Thomas Coville on his trimaran Sodebo, Joyon and his maxi-trimaran IDEC will have to cross the latitude of The Lizard by 0445hrs UTC (0645hrs CET) on Monday 17th June.

The final 24 hours in New York were very stressful for the Breton sailor from Locmariaquer, as everything was a bit of a rush. He had to find a RIB to help him out of Gateway Marina, finish stowing supplies aboard, work on the final weather details… and once again, as we have come to expect, Francis Joyon in his usual style, took care of everything himself, while benefiting whenever possible from any kind offers of help from other seafarers on the pontoons. Once out of the bay off New York, the ‘big red bird’, IDEC was free to fly in the open waters of the Atlantic.

The SW’ly wind was blowing as forecast off Ambrose Light, and in spite of a heavy swell, Francis Joyon was able to speed off from the outset at record pace with the speedo stuck above 23 knots. ‘The swell was hitting us as we left Ambrose Light,’ Francis Joyon explained at lunchtime today. He was happy to be alone again at sea and relieved to have made it out of the Hudson and away from the shoreline without hitch, in spite of a few anxious moments. His final hours in the Big Apple were rather rushed.

‘I didn’t have time to take care of all the supplies. I asked a guy on the pontoon to help me. He was Russian; he gave me some food from home. So it looks like it’s going to be Russian food this week…’

It was during the night that Francis got his boat away alone and removed the propeller, in order to head for the precise location, where we used to see the famous Ambrose Light. One last look around, the autopilot was switched on and the genoa trimmed… and Francis Joyon told the official from the World Speed Sailing Record Council, who was in New York, to start the clock for the big red trimaran. At 09:15:20 UTC (1115hrs CET), IDEC was off on her latest battle with the Atlantic.

‘The weather opportunity isn’t brilliant, but we will have to make do with that…’ Sounding light-hearted, once the decision had been taken in close collaboration with Jean-Yves Bernot, his accomplice on many a maritime adventure, Francis Joyon only wanted to look ahead to the next few hours. ‘I know that I should be getting some good conditions for the first two-thirds of the course, and according to the latest weather models there is some doubt about the finish, if we follow the route taken by the low-pressure area,’ explained Francis.

‘The route won’t exactly be the Great Circle route, as I shall be sailing a little further south. But on the other hand that means I shall be avoiding the worst fogs around the Great Banks…’ Fog, which has already engulfed IDEC in her first few miles of racing, forcing Francis Joyon to keep a close eye on the radar and over the bow of the boat.

‘I have just sailed between two whales.That was nice. They left me enough room to get through without having to manoeuvre…’ A 30-knot SW’ly wind is forecast ahead of the maxi-trimaran IDEC, with seas that are going to become increasingly tricky; Francis Joyon is facing a mammoth task and that is without taking into account the lack of sleep after a tiring voyage and a more or less sleepless night in New York. ‘It’s when I’m at sea that I get my rest,’ Francis reassured us… 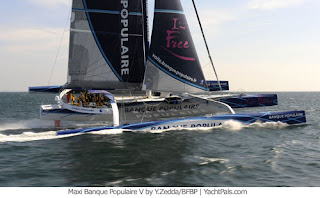 907 miles in 24 hours. Who would have imagined. Now they ( the crew aboard Banque Populaire) are seriously considering 1000 miles.