Some years ago this boats was in Newport and being restored. Obviously she changed hands and is now sailing. The photos I took in 2005, while she was still in Newport.

Dorade is wonderful boat that has found a loving owner. But she was too narrow when she was first conceived and it is a flaw she will carry all of her life. Her early success was just as likely due to the skill of those sailing her as well the departure from traditional design. She still causes people to pause when her name is mentioned.

Rod Stephens’ book “Lessons from the Sea” is available in pdf from Sparkman & Stephens. As most of you are aware Rod and his brother Olin were not only very influential but a dominate force in yachting as we knew it. Their influence is still present today, but sailing has taken a path that neither of the brothers approved.

Both wonderfully charming men they reflected the best of our times. Rod was definitive in his ideas, while Olin would politely disagree, not wishing to offend, but unmoved in his opinion in the end. 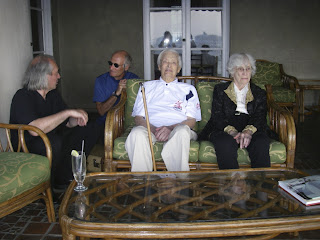 Olin Stephens turned 100 years old in April of this year. He touched so many lives during his lifetime; mentored many many yacht designers, and brought joy to many many yacht owners. The list of his accomplishments is so very long, as well. He designed 7 America’s Cup defenders, and was involved in several more.

He is pictured with Alan Hanover, the present owner of “Columbia” the 1958 defender. Alan proudly announced in 2000 that he intended to restore “Columbia” to her original shape, adding approximately 4 feet to the stern . Olin responded quietly:”Why would anyone do such a thing?” After the restoration was complete, Olin conceded that the boat really did look better.I sailed with Olin on a number of boats and our lives crossed for other reasons as well as I lofted and built a number of his designs.
Jim McCurdy is pictured with Olin aboard “Carina” one of Jim’s designs, in 1971 in Cowes, England. 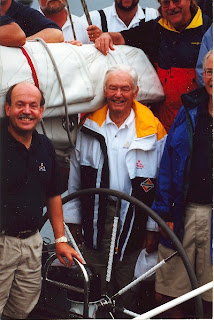 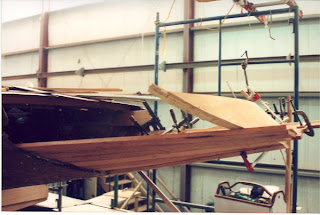 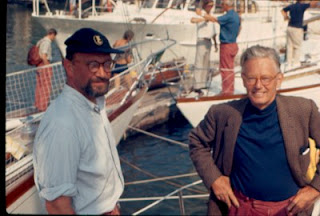 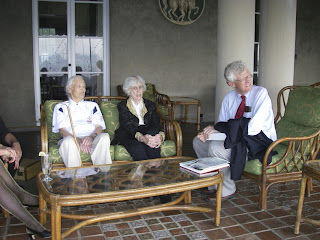 This regatta was a celebration not just of classic yachts but Olin Stephens 100th birthday. Just the number and variety of boats Olin designed that I had the privilege of sailing and the joy it gave me over the years, is more than a few. Olin’s name was synonymous with twelve meters and the defense of the America’s cup. 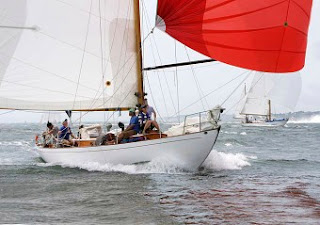 I am steering Peter Cassidy’s NY 32 “Siren” in the round the island race, we finished 2nd for the day and third overall. The New York 32 designed in 1935 was one of Olin’s designs.