In 1972 Following the Mediterranean Championships in Sardinia, I returned to Newport, won the Shields national championships with Joe O’Hora and George Brazil, and practiced for the Windsurfing worlds, that would take place in San Diego. Following the Windsurfing I joined “Charisma” in Rio de Janeiro, Brazil for the Rio circuit” styled after Admiral’s cup, three boat teams. Our team comprised of “Safari”, belonging to Paul Adams, “Sorcery” belonging to Jim Baldwin, and “Charisma”

The whole event was almost surreal .We rendezvoused as a crew at JFK for your flight to Rio, 13 hours, in a plane that was one-half cattle. In the name of economy I packed as if I were sailing one of today’s boats; only sailing gear, additionnaly having been told that there were no events. The first evening was a very formal reception at the US embassy. The next night was dinner at her royal highness, the princess of Denmark. I think that sets the stage. I was only moderately embarrassed.
Ted Turner was the guest skipper. The photo of the sunset wastaken at the finish of the first day race. As you can see there is no wind,we managed to finish. This 20 mile race had no time limit; there were boats still struggling to the finish line the next day. We raced to Santos, south of Rio, as a middle distance race. Then the long distance race left from Santos past Rio, to Cabo Frio.
This is were things go interesting, It must have been the first morning; the humidity at 110%, hence all the hatches are open, and I am still stuck to my bunk. We had an Argentine cook, for this race, cooking up a storm, at breakfast. I could hear and feel the boat starting to accelerate, helped change from the half ounce chute, toe the three-quarter, and then to our heavy 1.5 ounce coated spinnaker. About to eat the feast that had been prepared, spreaders in the water. and water pouring in from everywhere. The boat comes up, and off we go, cleaning up the mess below, and once more, spreaders in the water. and water pouring in from every opening. We charge up on deck and wrestle the chute down. Breakfast in now only and unfinished thought. With the boat under control, I go below to help bail and clean up, I hear an unfamiliar noise, and start looking everywhere to identify it. Finally discovering that it was Jesse’s knees literally knocking together.
From there, Ted took the wheel, and we were all on the rail to the finish. with a double head rig.
There were many other wonderful anecdotes, between the culture and the characters who were sailing in this era. 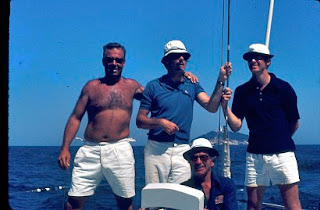 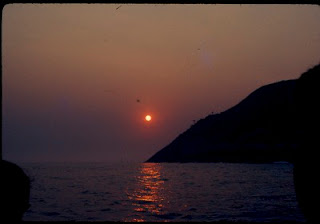 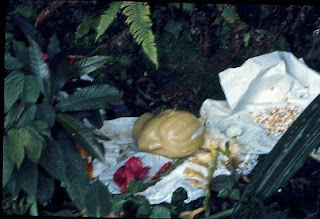