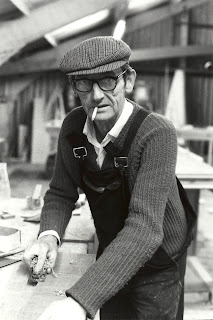 In the fall of 1974, We moved to the Isle of Wight, England, where I started work at Souter’s Shipyard, lofting and buildiing cold-moulded boats. The face at the right is of a by-gone era. I skippered a boat, the prototype of the Swan 41, called “Gunfleet of Hamble”, We were vying for a spot on the English Admiral’s Cup team. We practiced, the selection trials were fiercely competitive. Going into the final 200 mile race, we were tied for third with Yeoman, Robin Aisher’s boat. All we had to do was beat them and we were in. we could effectively ignore the other boats. The owner, got nervous and changed three of the crew, who had helped us get here, and listened to an “expert” weather consultant, claiming there would be light air all weekend. we left our heavy air sails ashore along with our steady crew. We did not make the cut.

I left shortly after that race to join “Weald” Frank Cummiskey’s Swan 48 for the trans-atlantic race from Newport to Cowes, Isle of Wight.
Shortly after the start, we encountered a strong low, 50 knots plus. We were just settling in to the conditions when our headstay came down. Sailing to Marblehead , a new headstay was installed and we restarted, managing to chase down a few competitors, however without hope of winning . Greeted along the way by the usual sea creatures.
After arriving in Cowes I joined “GitanaVI” a 66 foot S&S, belonging to Baron Edmond Rothschild, which had also taken part in the trans-atlantic race; for Cowes week racing.It was a culturally mixed crew ,comprised of Italians, French, and myself. In moment of crisis each would revert to their native language, English had been established as the language on deck. This led to some amusing moments. I should add that the food and clothes were without equal. 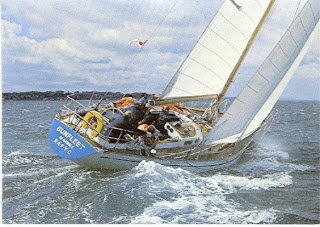 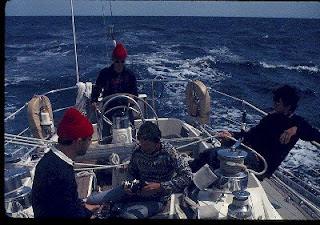 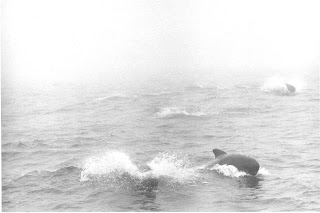 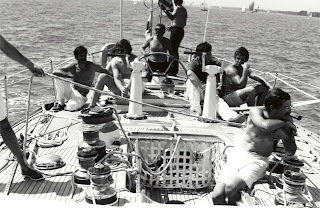