I read with interest the windskate story on Scuttlebutt
I have attached photos of my son doing the same thing in 1989. We used different size rigs depending on the wind strength. There are not many new ideas. 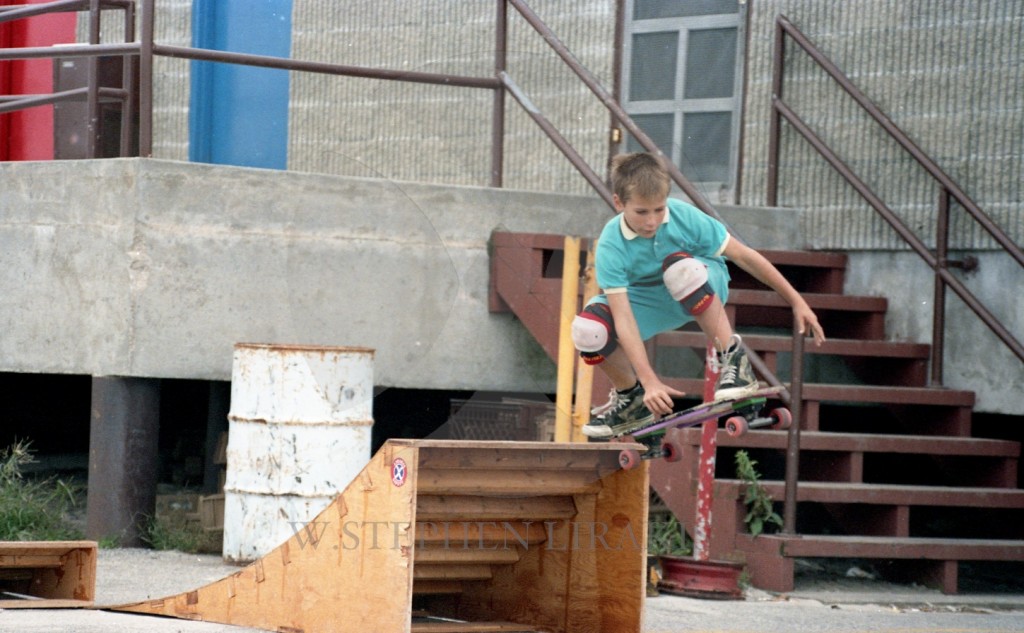 Wind & Water – the Invention of Windsurfing (2007) from Joseph Schuster on Vimeo.

I believe I first met Hoyle and Diane in 1970 at a boat show. We stayed in touch. I ended up in San Diego rebuilding a boat for the next Olympics; spending almost every weekend with Hoyle and Diane.
I returned from the 1972 Transatlantic to compete in the first world championships of Windsurfing held in Mission Bay.
I ended up taking sail number 48 to France.

The discussion about saving sailing is not a new one. I am one of those people who believe that youth sailing is out of whack. The costs associated are silly. Yet if you want your child to be competitive; you must buy in to the game.
The above video about building the patapon may be more than some wish to commit to in terms of detail of finish, but the concept is what is really important.
The Opti for example was originally conceived to be built inexpensively in your garage in plywood.

Don Finkle presents a compelling argument in his scuttlebutt article.

Where have all the young ones gone?
by Don Finkle, RCR Yachts
We have always believed in and supported youth sailing, which has now expanded from junior sailing schools to high school to college. The latter programs continue to pop up everywhere and young people can now start out at 6 years old and sail extensively on teams up into their early twenties. They have terrific opportunities that we never had at that age.

We are cranking out more well trained sailors than ever before. At the same time we hear that not enough young people are sailing and racing once they graduate out of these programs. We have more skilled young sailors but they are not sticking with it. Why doesn’t this add up?

I don’t buy the idea that kids (I use that term loosely) stop sailing because boats are no longer given to them to use. There are so many crew shortages, even boats they can borrow, that opportunities to sail are everywhere. Used boats are very inexpensive right now; being in the business I can say that with confidence. Many small used one design boats are practically being given away. In our opinion the problem lies elsewhere.

If a youngster starts sailing at six years old and stays with it through college, he/she will have been sailing for most of their lives to that point. Frankly, for them to opt out at this point, it is often a case of “been there, done that”. Those hours and days spent sailing in dinghies were hours they were not playing golf, tennis, softball, fishing, scuba diving, swimming, biking, and many other activities they now want to try.

Young people today have so many opportunities and are accustomed to doing many different things for entertainment. Sailing gets crossed off the list and they are ready to catch up on what they missed. The other issue is that if sailing as they know it means more short-course races in small boats many of them have had their fill after 10-15 years of doing it. Some are just plain burned out.

A percentage of these skilled and enthusiastic dinghy sailors will stay with it. Others will come back to the sport when they are older, often much older. But if we want to keep more young sailors engaged in the sport in their 20s and 30s, they need to see more of a return on their time in the form of fun and social interaction. This likely means a different type of sailing than what they have been doing.

We should ask them and find out.

3
What happened to windsurfing?

Back in 1967 my dad’s former roommate from Pomona College co-invented, and later co-patented what would be called the Windsurfer. Hoyle Schweitzer and Jim Drake came up with the idea of combining surfing and sailing, but it was Hoyle who founded Windsurfing International, and the Schweitzer family who promoted the sport and brought it out of its inception. My dad, Seymour, became one of the first Windsurfer dealers, in Newport Beach, and still probably holds some kind of record for teaching the most people how to windsurf…definitely a record for getting the most crusty old traditional sailors to give it a try.

It was our family sport. My earliest memory is playing in the sand at Bahia Santa Maria, Baja California, while various Beeks, Schweitzers, Waltzes, Swateks, and Parduccis raced on the first generation of windsurfers, with teak booms. By the time I was old enough to pull the sail out of the water (a fateful day, also at Bahia de Santa Maria) windsurfing was exploding…but we didn’t know it.

Our tribe migrated around the Southwest for regattas most of the year: Long Beach, Mission Bay, Newport Harbor, Huntington Lake, Pyramid Lake, Castaic Lake, and Bahia de Santa Maria every Easter and Thanksgiving. We almost always camped. The windsurfing tribe, in hindsight, looked like a nascent version of Burning Man. The Schweitzer’s big van was always the anchor tenant, but the Waltze’s VW bus and my dad’s Ford lease car du jour (he worked for Ford for 23 years) were always stuck in the sand nearby. The Schweitzers always had wooden planks for getting cars unstuck.

Then one day the crowd changed. Our little band of Southern California windsurfers was joined by Sven from Sweden, Jorg from Germany, Toro from Japan, and Dario from Italy. They’d all come to race against the best. Unbeknownst to us kids, the original tribe had been outnumbered tenfold around the world. In Europe the idea of a fully-functional sailboat that could be carried on top of a car led to an explosion of the sport. Soon there was competition in manufacturing sailboards, and years of legal battles. At the world championships in 1974, where my dad won the heavyweights, it seemed there were as many Europeans as Americans. And a few years later a punk kid from Hawaii named Robby Naish began his domination of the sport that lasted most of my lifetime.

It wasn’t just the fun and convenience. Something about Windsufing embodied the Zeitgeist of the seventies: independence and individual freedom, with strong counter-culture overtones. It put a sailor closer to nature–just inches above the water, and often in it. It was the poor man’s sailboat, which had never existed before. A windsurfer sailor didn’t need yacht clubs, a fancy home, or a lot of money. He just needed a patch of sand to set up his rig and he was off into the sunset…until he’d crawl back into his tent on the beach.

By the eighties it was everywhere: The Sunkist orange soda commercial, the Frosted Flakes commercial (“They’re Great!”). A 14-year-old Clark Beek even windsurfed in a TV commercial for Nature Valley Granola Clusters, with my big speaking part (“Alright!”) which kicked me into the higher pay scale, and netted me enough money to buy my first car. In 1984 it became an Olympic sport, in Los Angeles, right where the sport began.

We flew to Maui every summer to stay with the Schweitzers, and saw revolutionary developments every time: Wave jumping, harnesses (and getting “launched” until we learned how to use them properly), the RAF (Rotating Asymmetrical Foil AKA Not Normal), Mylar sails, and then the biggest development of all, the water start. With the water start you didn’t have to stand up on the board to pull up the sail, meaning the board didn’t have to be big enough to float body weight, meaning the birth of the short board and serious speed. The world sailing speed record, tandem boards, professional sailboarders…there was no telling where it was going next.

But alas, windsurfing’s days as everyman’s sport are gone. Some say it’s because you can’t buy a cheap sailboard package anymore. In its heyday you could buy a cheapo sailboard for less than $500, then move up once you decided you were hooked. Those in the know will be quick to point out that the top of the sport is still moving up: windsurfers keep going faster, equipment keeps getting better, and back in the day we couldn’t have dreamed of the moves they’re pulling in the surf these days. Check out this guy:

Maybe the times have just changed…dang kids and their video games. I, however, will always go back to Bahia Santa Maria (we’ve got a shack on the beach now) and sail my original Windsurfer through the shallows at high tide.

Ted, the youngest Schweitzer kid, has put together a great website, Original Windsurfer, which chronicles the first ten years of the sport. For me it’s like reading a family scrap book. There are debates as to who actually invented the sailboard (it turns out there were sailboard-like-prototypes clear back in the forties), and to what direction the sport could have taken at various times, but I think everyone agrees that if Hoyle and Diane Schweitzer hadn’t packed their young family in that van and carted them all over creation to promote the sport—in the most fun, sharing, Tequila-around-the-campfire kind of way—the sport would have never grown beyond a silly contraption you’d find in the back of Popular Mechanics.

…and I doubt kiteboarding would have followed.

I first met Robbie Naish at the beach in Malibu. He was 10 years old at most; a friend of Hoyle Schweitzer’s children. He still could not hold the windsurfer sail up by himself. I watched his career in awe over the years. He took windsurfing beyond the limits. He was kiteboarding with a windsurfer when you look back. He must be around 50 years old now.