I had my own experience with a message in a bottle. I find it is a rather profound event in life representative of so many thoughts and feelings. 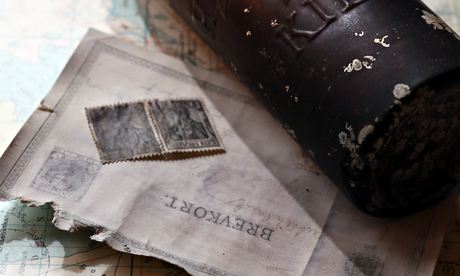 Richard Platz’s message, which he threw into the sea in 1913, when he was 20 years old. Photograph: Uwe Paesler/EPA

Angela Erdmann never knew her grandfather. He died in 1946, six years before she was born. But on Tuesday she described the extraordinary moment when she received a message in a bottle 101 years after he had lobbed it into the Baltic Sea.

Thought to be the world’s oldest message in a bottle, it was presented to Erdmann by the museum that is now exhibiting it in Germany.

“It was very surprising,” Erdmann, 62, said, recalling how she found out about the bottle. “A man stood in front of my door and told me he had post from my grandfather. He then told me that a message in a bottle was found and that the name that was on the card was that of my grandfather.”

Her visitor was a genealogical researcher who had managed to track her down in Berlin after the letter was given to the International Maritime Museum in the northern port city of Hamburg.

The brown beer bottle, which had been in the water for 101 years, was found in the catch of Konrad Fischer, a fisherman, who had been out in the Baltic Sea off the northern city of Kiel last month.

Holger von Neuhoff, curator for ocean and science at the museum said this bottled message was the oldest he had come across. “There are documents that have been found without the bottle that are older and are in the museum,” he said. “But with the bottle and the document, this is certainly the oldest at the moment. It is in extremely good condition.”

Researchers believe Erdmann’s grandfather, Richard Platz, threw the bottle in the sea while on a hike with a nature appreciation group in 1913. He was 20 years old at the time.

Much of the postcard was indecipherable, although the address in Berlin on the front of the card was legible, as was the author’s polite request that the note be sent by the finder to his home address.

“He also included two stamps from that time that were also in the bottle, so the finder would not incur a cost,” Erdmann said. “But he had not thought it would take 101 years.”

She said she was moved by the arrival of the message, although she had not known her grandfather because he died, at the age of 54, six years before she was born.

“I knew very little about my grandfather, but I found out that he was a writer who was very open minded, believed in freedom and that everyone should respect each other,” she said. “He did a lot for the young and later travelled with his wife and two daughters. It was wonderful because I could see where my roots came from.”

Like her grandfather, Erdmann said, she also liked culture and travelling around the world. She described herself as open minded, too. “What he taught his two daughters, my mother taught me and I have then given to my sons,” she said.

Despite her joy at receiving the bottled message, she said, however, that she hoped others would not repeat what her grandfather had done and throw bottles with messages into the sea. “Today the sea is so full of so many bottles and rubbish, that more shouldn’t be thrown in there,” she said.

The message and the bottle will be on display at Hamburg’s maritime museum until the beginning of May after which experts will attempt to decipher the rest of the text. It is not clear what will then happen to the bottle, but Erdmann hopes it will stay at the museum.

“We want to make a few photos available to put with the bottle and give it a face, so visitors can see the young man who threw the bottle into the water,” she said.