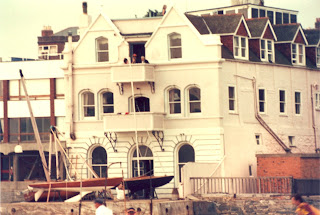 Buckminster Fuller might easily be labeled the guru of the “woodstock generation”. perhaps best known generally for his geodesic dome. He was a global thinker,he was green long before it was fashionable. He completed few projects, was not really an architect, yet he made an enduring impression. The Whitney Museum just finished an exhibit dedicated to “Bucky” and his ideas. I confess he intrigued me as well. I saw him speak a number of times while in school.

Uffa Fox,in my mind is very much the same. No discussion of the history of sailing is complete without including him; yet he was not a naval architect. He designed and built boats, but could never stay in business. His thinking nevertheless, cleared the way for the next necessary step in design thinking in yacht design. Again I remain intrigued with Uffa, I met him on a number of occasions.