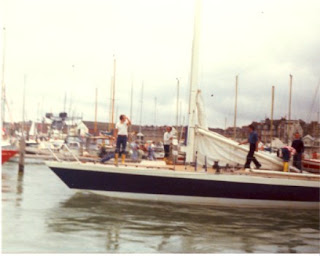 Following Cowes Week aboard “Gitana VI” I raced the Fastnet with “Guia” belonging to Georgio Falk. “Guia” had been built for the previous Admiral’s Cup as “Ginko” a 44 foot Bob Miller/Ben Lexan design. A light fast boat, having scored well in 1973 and had won an inshore race in 1975. Again, a mixed crew of talented Italians and French, and again English was the language on Deck, except when faced with a crisis.

It was the ride back from Fastnet Rock, where this occurred, the Wind freshened, to 30 plus knots. We were scudding along at 15-17 knots; A spinnaker change was necessary, I opted to steer staying out of the language barrier problem. From here our fate took a turn for the worse; as I watched the competition shrink on the horizon ahead. Both spinnakers were wrapped around the headstay and required cutting away.
I returned to the United States, to sail the One Ton Worlds, in Newport, with Ted Turner on “Vamp” a Peterson design. A hard series, we faired well, however, being beaten by Lowell North in “Pied Piper” also a Peterson design, so Ted bought Lowell’s boat. which we sailed in the 1976 One Ton World’s. a story for another installment. 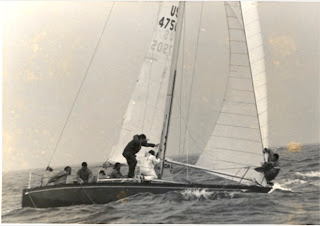