Gene Ambo was one of the early regulars sailing on “Charisma”. The Charisma Crew held a reunion in Chicago two years ago. Gene was surely the life of the party.

Eugene Ambo,
A Remembrance of His Life, Age 82. He was known variously as Gene, Geno or Ambo and sometimes as “The Super Jap” and thirty years ago on  he was one of the eleven persons who met at the offices of Kaufman and Ladd for the purpose, “To discuss the steps to establish a social Club to be named the Eastport Yacht Club.”
Gene Ambo was not from Eastport but then none of the founders of the EYC were from here.  He was born in California of Japanese parents and although they were industrious farmers, the family was interned by the Federal Government shortly after the Japanese attack on  in 1941.   This did not deter the United States Government from drafting him into the army after the end of World War II.  Gene served in the Army Air Corp which brought him to .  After his discharge from the Army, he stayed around  and got involved in photography and eventually had a successful graphics and advertising business.  There he got to racing sailboats on the  and then on occasion on the East Coast and to  for the then popular SORC.  He developed into a respected navigator and all around racing hand mostly on boats from the .  When in his mid-40’s, Gene dropped out of the business world and got to managing ocean racing boats full time and this brought him often to and Eastport.  In the late 1970’s he settled here and among other things he established Presto Photo, the first one-hour film processing shop in this area.
Gene was very active in the formative years of the EYC and was the first Entertainment Committee Chairman.  The parties that he organized were large and consistent money makers in the early years of the club.  He had an unusually good, if reckless, command of the English language.  He came up with the name Spring Cotillion in place of the name BN Ball.  When we asked him why Cotillion, he suggested that we look it up and we did and found it to be “An elaborate dance marked by the giving of favors and the frequent changing of partners.” He continued to be active in ocean racing and was often the navigator for Jack King in MERRYTHOUGHT and she was a consistent winner.
But then other interests call and he dropped out of the EYC and then he moved back to  where he lived with his wife Milenka.  Many of us were in contact with him by e-mail where he rather constantly entertained us.  Gene Ambo and his wife Milenka did visit Eastport of the 20th and the 25th Anniversary of the founding of the Eastport Yacht Club.  He was very pleased to have been a part of the creation of the YYC.
It is our understanding that Gene is to make one more trip to Eastport but in a somewhat more compact form and more quite manner then usual and there is to be a Celebration of his Life and a spreading of ashes.  We will keep those persons who are interested aware of the developments.
These observations were organized by Fred Hecklinger, Rob Ladd, Jeff Goldring and others of the original founders of the Eastport Yacht Club 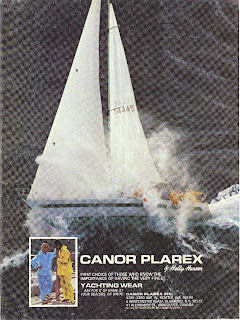 SORC 1977 I sailed on “Love Machine” a 44 foot Doug Peterson design belonging to Dick Hokin. Skippered by Tom Whidden. I was a helsman and watch captain for the distance races. The photo, was taken either in the Ocean Triangle or Miami-Naussau race. 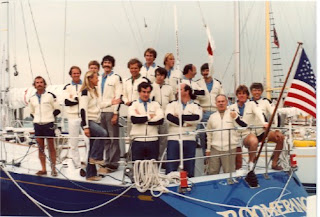 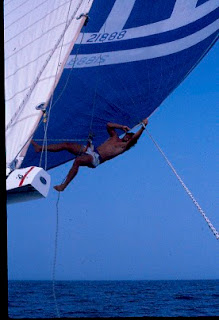 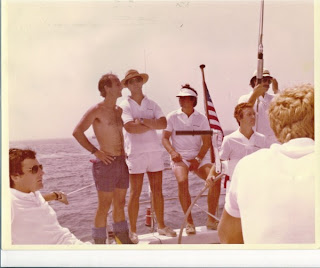