Today was the six meter class meeting in the harry anderson library in the Seaman’s Church Institute in Newport. Toby Rodes presiding. With a bit of luck there will be more than 10 boats on the line for the NYYC spring regatta june 11-12.

Three boats will leave for the world championship in Helsinki, which promises to be a wonderful event with over 50 boats.

If you love to race, and want to have fun doing it, no class does it better than the six metre class. Never have I experienced a group that exhibits better the values of yacht racing. Loves the boats they sail; knows more about the history not only of the class but each and every boat. I know the parties will be fun the people nice. Not to be missed.

The Six Metres gather at the NJK–yacht club at Blekholmen

6mR-class World Championship 2011 will be held from 5th August to 12th of August at the NJK-yacht club at Blekholmen in Helsinki. The championship takes place every two years and is expected to bring together a fleet of around 50 boats and 250 yachtsmen from around the world.

This will be the 19th Six Metre World Cup. In the year 2009 the WC was sailed in Newport, USA. There the winner in modern Six Metres was Sweden’s Hugo Stenbeck with Sophie II, and in classics Canada’s Eric Jespersen with Gallant. From Åland, Finland, Henrik Lundberg took silver in the classics with Fridolin. Both winners are America’s Cup –veterans. The Finns have won the championship in classics three times, last in 2003. The Swedes on the other hand have mastered the championship in moderns.

The championship was last held in Helsinki in 1999. The Six Metres was an Olympic class from 1908 until 1952. Among the boats participating in this year’s Helsinki WC are all top-5 boats from the Helsinki Olympics 1952.

The Six Metres in Finland add up to 40, and worldwide the registered boats add up to around 300. Following the Six Metre rating rule, each boat is different. The Six Metres are considered extraordinary beautiful and many highly esteemed boatdesigners are among the constructors, namely the late Olin Stephens from USA and Finland’s Gösta Kyntzell.

For those of you who would like to follow Brian Thompson aboard Banque Populaire V in their attempt to break the record non-stop around the world, click HERE.

The SIX METER WORLD CHAMPIONSHIP will be in HELSINKI in 2011. Here is how to get your boat there. This promises to be a wonderful event. The Six meter clan are are a terrific group. Join them on the Facebook Group. 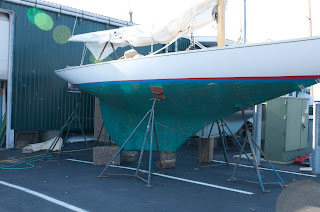 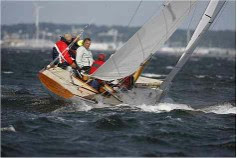 “MADCAP” IS FOR SALE.