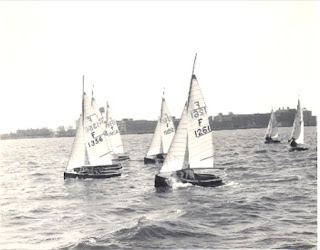 As in all boarding schools, nicknames were prevalent; our coach was affectionately know as “mad dog”, someone who suffered fools with difficulty and was always eager to challenge you intellectually. He was a good sailor and a smart coach.
During my tenure at SG I had a classmate, Steve Moore, “wonder boy” He was light years ahead of the rest of us as far as sailing was concerned. Interscholastic sailing in this time was primarily team racing. It made sense, more people participated, and acted as a team. There was a problem, “Wonder Boy” was so good, he was simply too fast. the combinations usually depended on a first.
We sailed Fireflies, hot moulded boats, still used in the Wilson Trophy, in the UK. Paul Elvstrom’s first Olympic gold was in a firefly, which was sailed single-handed in the Olympics