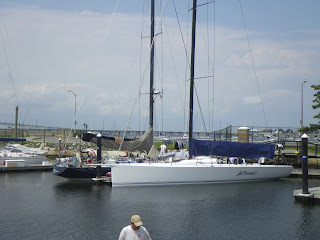 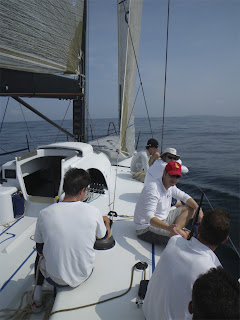 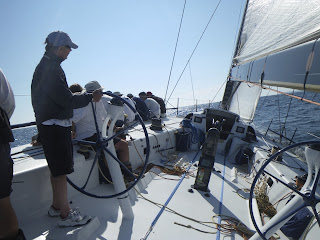 I was invited to sail on John Brim’s 55 foot R/P “Rima” for the 177 mile Ida Lewis Yacht Club Long Distance Race over the weekend.As a helmsman,teaming up with my old shipmate Ed Cesare, who Navigated, his brother Ben, Jack Orr from North Sails and a score of other great sailors.

In this first photo showing “Rima” there is also the stern of “Charisma”, the same boat I have written so much about in earlier entries, now belonging to a Spanish owner.
The boat is very nicely set up and well built. a treat to sail. The weather forecast for the weekend was, if you can think of it, it might happen, making any strategy other than staying near the rhumb line impossible to formulate.
The only treat was the last four hours of the race beam reaching from Montauk to Newport at 16 knots. One could not help but smile, the boat is so well behaved.